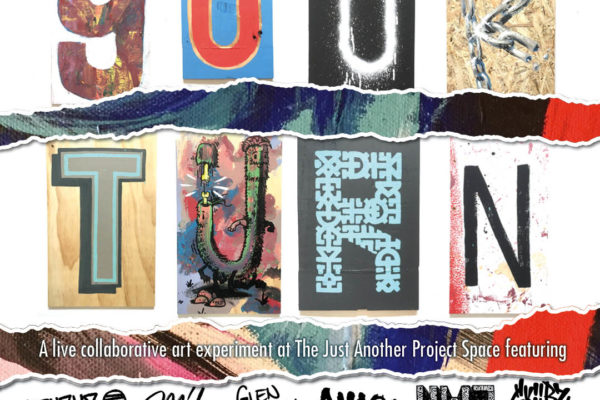 Members of South East Melbourne’s Arts Hole Studio will be occupying the Just Another Project space as a home away from home this March in their new concept group show “Your Turn”.

Chehehe, Glen Downey, Mitch Walder, Amac, Skubz Mope and HWJ among other creative collaborators and guests will transform the space into an ever changing pulsating studio that will see everyone’s creative processes woven together over the month to produce an all new body of work that amalgamates their broad range of styles and processes.

“Your Turn” will have a sharp focus on re-use and recycling both practically and conceptually. All materials will be found or re-cycled while concepts, patterns and processes get similarly re-used, borrowed and re-purposed as the show progresses.

The entire process will be visible to the public who are welcome to attend the Just Another Space throughout the month as “Your Turn” invites guest musicians, pong players, artists and other creatives into the space to demonstrate the positive power re-use and shared creativity.

Between them the artists involved in Your Turn have exhibited in shows and galleries throughout Melbourne, Australia and the world. As studio mates at The Artshole they have developed a strong collaborative element to their practice which until now has never been on show outside of the Artshole Studio.

Come down to The Just Another Project Space to see the space transformed into a mini working studio.

Witness these artists and other creative collaborators working in the space during the month of March as they create, complete and show Your Turn.

Dodgy Paper will be in amongst the residency producing paper for the show and for sale.Come down and see the dodginess live as scrap turns to treasure in Your Turn

During production Your Turn artists will invite guest creatives from around Melbourne and Australia to come and jam live in the space and become part of the show.